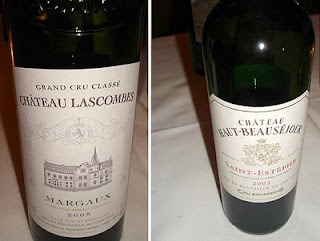 BASICS Bordeaux is made up mostly of large vineyards that grow and produce the wines. The label Mis en Bouteille au Château means “bottled at the chateau.” These glamorous reds are extremely refined and age gracefully. Bordeaux is governed by a set of regulations known as Appellation Contrôlée (AC). Almost all red Bordeaux is blended. Red wine grape varieties are: Cabernet Sauvignon, Merlot, Cabernet Franc, Malbec and Petit Verdot. White varieties are: Sémillon, Sauvignon Blanc and Muscadelle. 2005 seems to be the year everyone talks about as the best. Ranks: Cru Bourgeois, then Cru Bourgeois Superieur, then Cru Bourgeois Exceptionnel.
PICKS I described this as “easy” and “perfect” the 2005 Chateau Lascombes Margaux ($80). A tie for second place: 2004 Les Fiefs de Lagrange Saint Julien, which was still a little young, ready next year, and 2003 medoc Chateau Looudenne Cru Bourgeois Superieur ($19). Others worth mentioning: 2004 Chateau Cantemerle Haut Medoc ($55), priced right and is a classic example; Chateau Haut-Beausejour, Sainte-Estephe Cru Bourgeois ($22), smack finish, from more limestone in soil; Chateau de Pez, Sainte-Estephe Cru Bourgeois Exceptionnel ($28), very earthy, like a wet forest; 2002 Chateau Ducru-Beaucaillou Saint Julien, full bodied, a masculine wine to drink while relaxing or before going to bed. See more Lever House Wine Club in the OUT AND ABOUT section.
Posted by Unknown at 2:38 PM No comments:

Email ThisBlogThis!Share to TwitterShare to FacebookShare to Pinterest
Labels: • wine, OUT AND ABOUT 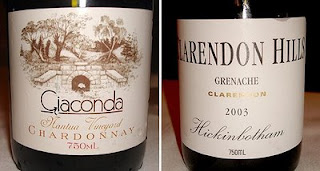 BASICS Australia grows a huge assortment of grapes. A lot of their vineyards must irrigate because of low rainfall, however terroirs are starting to be mapped out in certain areas. Adelaide Hills is a cool climate area that is getting a lot of attention now. South of Adelaide is Clarendon Hills, old-school producers with 10 vineyards: Brookman, Hickinbotham, Sandown, Blewitt Springs, Clarendon, Liandra, Piggott Range, Romas, Astralis and Kangarilla.
PICKS Loved Giaconda, a 2006 chardonnay by Natua Vineyard, from Victoria, the best by far. A decent, good drinking everyday white was Jim Barry Silly Mid On, from Adelaide Hills, also a 2006. We tried 5 wines by Clarendon Hills, which were all good: two grenaches were my favorites, a 2004 Blewitt Springs, and a 2003 Hickinbotham; a syrah 2004 Moritz, very full and fruity, great to drink on its own; a merlot 2004 Brookman had a nice bite to the finish, and a great cabernet sauvignon called Sandown, 2004. See more Lever House Wine Club in the OUT AND ABOUT section.
Posted by Unknown at 2:19 PM No comments:

Email ThisBlogThis!Share to TwitterShare to FacebookShare to Pinterest
Labels: • wine, OUT AND ABOUT

BASICS Spain’s famous grape is called Temperanillo, which creates a wine of low acidity and less of an alcoholic content, and is used to make riojas. The term Crianza is applied to a rioja when it has spent one year in a cask, and is at least three years old. The grape is usually blended with other reds, such as Garnacha Tinta, Graciano, and Mazuelo. White varieties: Godello, Albariño, Treixadura, Verdejo, Malvasía.
PICKS The two whites that impressed me were the 2006 Viña Godeval, from the Valdeorras region, made from the godello grape, which was heavy with a sweet touch of honey, and the 2006 Naia from Rueda, which was nice and crisp, acidic on the tounge, with a hint of almonds and a great smell. It was my first choice for the whites, made from the verdejo grape, which is considered to be the finest for white. Of the reds, the 2006 Valtosca, Syrah from Jumilla made the cut, which tasted like the most appealing cough syrup you could ever have—and I mean that in the most complimentary way—so soothing and sweet. It’s soil is high in minerals. The 2005 Alto Moncayo Veraton made with 100% grenache from Campo de Borja is grown in the high mountains on super old vines—my tasting notes only say “yum”—plus I really love the label, which is a mosaic of all the colors of the soil. See more Lever House Wine Club in the OUT AND ABOUT section.
Posted by Unknown at 2:08 PM No comments:

Email ThisBlogThis!Share to TwitterShare to FacebookShare to Pinterest
Labels: • wine, OUT AND ABOUT
Newer Posts Older Posts Home
Subscribe to: Posts (Atom) 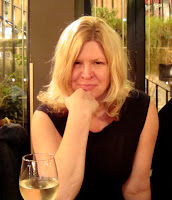